For acclaimed modern rock quartet Honor By August there is a lot in a name. The “August” in the Washington, D.C.-based band’s name refers to another interpretation of the word: to inspire awe or admiration. Taken as a whole, “Honor By August” means to ‘earn you honor’ by doing something admirable or awe-inspiring. “The name informs our music in several ways. We all believe in doing things the right way, with integrity, and making music that comes from a place of real inspiration,” says frontman Michael Pearsall. On their latest release, “Monuments To Progress,” the band does just that. Honor By August delves deep and delivers its finest collection of emotionally charged rock.

Honor By August’s blend of atmospherics and anthemic choruses have drawn favorable comparisons to U2, Kings of Leon, Snow Patrol and Bruce Springsteen. The Washington Post has called the quartet “one of the most promising new talents on the East Coast.” Recently, the band won Billboard’s “World Song Contest.” The group has shared stages with such diverse artists as Imagine Dragons, Bon Jovi, Switchfoot, Jonny Lang, Third Eye Blind, Hanson and Parachute. As a main attraction, Honor By August has pulled over 900 into DC’s esteemed 9:30 Club. The group’s music has been broadcast to millions many times over on ESPN, E! and popular MTV shows, and Honor By August has worked with Grammy-winning producers, mixers and engineers including Jack Joseph Puig (U2, Snow Patrol, Rolling Stones), Paul David Hager (Goo Goo Dolls), Jeff Juliano (John Mayer, O.A.R, Lifehouse), Toby Wright (Third Eye Blind) and Jim Ebert (Butch Walker, Meredith Brooks).

Honor By August is Michael Pearsall, lead vocals/guitar; Evan Field, guitar/piano/backing vocals; Chris Rafetto bass/piano/backing vocals; and Brian Shanley drums/percussion. The band’s music reflects its commitment to writing honestly about life. “We hope that our music finds a place in people’s lives wherever they may be on the continuum of life’s highs and lows,” Pearsall says. “If you’re going through a tough time, hopefully one of our songs will help you through it. If you’re having a great time, hopefully one of our songs can enhance that experience. Life is what we make of it so why not try to make the most of it?”

“Monuments To Progress,” which was fully funded by a Kickstarter campaign, benefits from a period of fluid creativity within the band. “The writing process was much more collaborative in nature this time around. Everybody contributed songs and/or lyrical ideas so there’s a real sense of collective ownership,” Pearsall reveals. Letting the songwriting process flow organically has enabled the band to write its strongest material. The uplifting “Last Chance” is the album’s lead single. It’s a cathartic track with an introspective verse exploding into a soaringly defiant chorus hook. The song’s immediacy and messaging is empowering. “It’s about that moment where you feel like things are falling apart around you but you’re not quite ready to throw in the towel,” Pearsall says. “The song is about recognizing that you have a chance to turn it around.”

Other standouts are “Believe” and the driving “Already Yours.” “Believe,” the closing track whose lyrics gave the album its title, builds from spare acoustics and continue climbing, its sweeping dynamics perfectly tailored to powerfully introspective lyrics like “faith isn’t something I can borrow” and “working so hard to build these monuments to progress, though we may never see tomorrow.”

“That lyric represents a theme threaded throughout the record,” Pearsall says. “Whether it’s something as serious as faith in yourself and your ability to love and care for another person or something as simple as pursuing happiness in the moment…All we do in our lives makes us who we are. All these things are monuments to progress.” “Already Yours” is boldly romantic. “It is a song about putting up a fight for love,” Pearsall says. “It’s also an invitation for someone to love you. It’s saying, ‘I’m here…All you have to do is step up and give me some sign that you’re ready to take a chance on us.’”

Monuments To Progress was recorded at Cue Recording in Falls Church, VA, and produced by Jim Ebert (Butch Walker, Meredith Brooks). This time the band went for a richer sonic tapestry than their previous releases, opting for a fuller sound and a variety of elegantly subtle textures. The recording was fan-funded through a tremendously successful Kickstarter campaign. “It was encouraging and humbling to see how much people believed in us and wanted to hear more music from Honor By August,” Pearsall says.

“We’ve met a lot of great bands and made a lot of great fans on the road. We’ve seen more of this beautiful country in a few years than most people see in a lifetime,” Pearsall says, reflecting on the band’s history. “Up until recently we’ve done it all without much help from anyone in the industry. Thanks to our fans, families and friends, as well as our continued belief in ourselves, we’ve been able to share what we love to do with a small part of the world. We hope this record allows us to continue that journey and share our music with even more people all over the world.”

Honor By August are proud supporters of The Alzheimer’s Foundation of America (AFA) and are one of the many AFA artists who Raise Their Voice for Care. Please click here for more information and to support the AFA in the great work that they do! 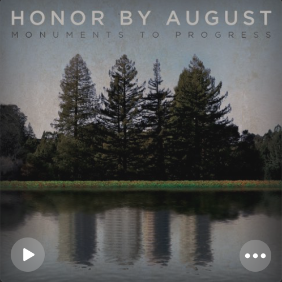